How is the DLAB Test Organized

Home DLAB FAQ How is the DLAB Test Organized 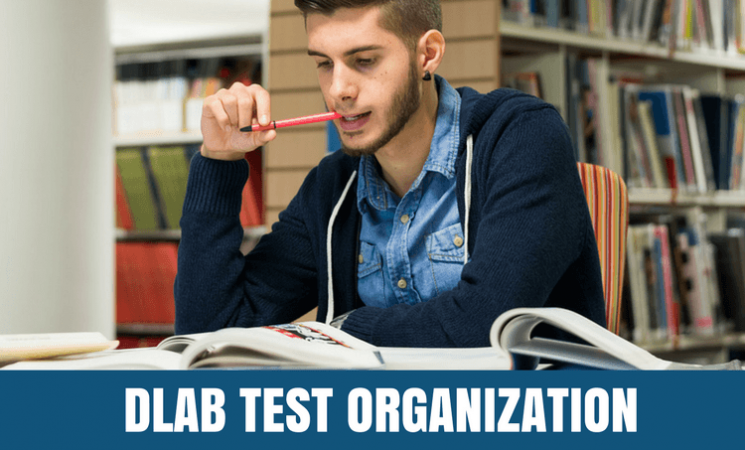 If you are reading this, then that means you have been told be a detailer or superior that you need to take the Defense Language Aptitude Battery Test or commonly known as the DLAB. Chances are too that the person telling you to take the test had a very basic description but didn’t exactly tell you what to expect on the test. Well, fear no longer. We at DLAB Prep have put together a detailed description of the DLAB test and what you will see when you take it.

The DLAB test, basically put, consists of 124 multiple choice questions broken into two parts: Audio and Visual.  In general, the test is comprised of a made-up gibberish language with a set of grammatical rules that apply to each section of the test.   This organization was designed to test one's ability to aptly apply different concepts of language in an expedited manner.  Details about the two segments are as follows:

The first part of the DLAB is the audio segment.  For this portion of the test, you will dawn headphones and the audio files will only play once.  It is important you understand this because if you are waiting for a reply, then you are too late.

The audio portion is broken up into two parts.  In the first part, the narrator will pronounce four words at a time.  It is your job to figure out which of the four words has a different stress pattern than the others.

The above words will be in a gibberish language however for purpose of reading, we chose recognizable words to illustrate the difference in sounds.  So, which one has a different stress sound to it?  If you choose “C” then you are correct.  In “Pre-Make” you stress the “Pre” and end with a short staccato sound of “make”.  You might be saying to yourself “that’s really subtle” and you would be correct, but if you focus, you can hear a larger stress difference between them.  Just don’t over think it.

Also, the key to remember is that it will never be anything extremely obvious like:

Instead, they will have similar words in length that sometimes have a different amount of syllables but sometimes won’t.  It is then up to do to find those with different stresses.  So pay attention to the subtle differences and you should be fine.

The second part of the audio portion moves towards grammar and sentence structure application.  The narrator will start by giving you a grammar rule such as:

1. Only Verbs end in a vowel

Then you audio question will be: “What word means “run”?

If you chose “D” then you would be correct.  Only “D” ends in a vowel and therefore is the only verb out of all the other four.

If you chose “D” then you would be correct.  Only “D” ends in a vowel and therefore is the only verb out of all the other four.

The next question, the narrator will give you another grammar rule.

The key is that you now need to apply both grammar rule #1 and #2 to answer the next question.

The audio question will be: “Which sentence means “the women walks”

If you chose “A” then you are correct. Since the verb needs to be before the noun and a verb always ends in a vowel, then “A” is the only possibility.   It's not “B” or “C” because the last word in both sentences end in vowels.

And as it did in the previous questions, the next question will add another rule and another until finally, you will have a series of questions with a large list of rules to follow.  Sounds scary right?  Well if you want to know the list of grammar rules beforehand, and therefore don’t need to quickly memorize them during the test, The Official DLAB Training Manual actually has the list inside.  Therefore, just by buying the book, you won’t have that extra worry and can even practice using the grammar rules in the DLAB Practice Test in the end.  How awesome is that?

In this section, the tape is turned off and the rules that you learned in the audio section no longer apply.  In the visual segment, you will be shown a series of pictures with a set of gibberish made-up language words under them.  Each set of words represent what you see in the picture.  By looking at the pictures and the words, you will then need to apply that which you learned from the “translations” on the set of questions that follows.

Now your question will be:
Which sentence means “A silver tire rolling”

If you answer “A” then you would be correct.  In the picture phrases above you can see that in this language, the adjective always follows the noun.  This can be deduced by “mahora”, meaning black, showing up after a word in both pictures 1 and 3.  So therefore in picture 4, “corka” must mean silver and “A” is the only option with “corka” being in between the noun and the verb.

It is important to note that this was an easy question compared to what you will see near the end of the test.  It is this writer's personal belief that in the visual segment, the questions get harder and harder.  In the questions near the end, you will have to look for very small subtleties between the pictures and will not find corresponding words in them.

Think of it like playing Sudoku.  The easier Sudoku questions have a lot of numbers already filled in.  Then its just applying the rules and figuring out which numbers should be where.  However at the end of the DLAB test, you will find that like hard Sudoku questions, you will have fewer blocks filled in and will have to make “leaps of faith” to try and figure out what means what.